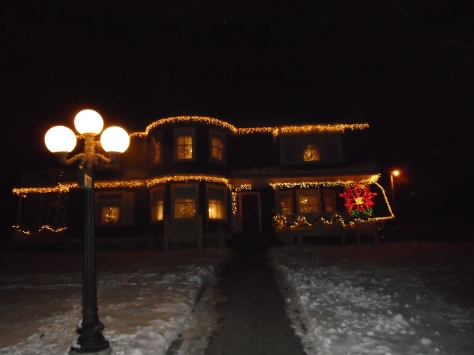 Today the road has brought me to Chatfield, MN.

Welcome to Part II of the Cavalcade of Christmas.  The inn for this trip is Oakenwald Terrace, sometimes known as the Ellen Lovell House, owned and operated by Marion, Bob, and Ruth Ann Lund. When I was originally researching inns for the annual Christmas review, this inn launched itself to the top of my list with its advertisements for how seriously it takes the holiday.  So proud is Oakenwald Terrace of how it celebrates Christmas, that it even hosts an annual open house just so they can show off the inn.  For a Christmas nut like yours truly, it was like ringing the chow bell.  So I booked a stay.

Unlike the wacky weather of last week, this weekend was set to be frigid, but sunny.  Truthfully, this was the most pleasant drive I had enjoyed in a while.  I just felt more at peace than usual and my MP3 player was pulling up some long forgotten classics.  I also had the pleasure of watching the small town Christmases of a number of small towns as I took a scenic route to Chatfield through Fort Dodge to have lunch with my best friend, Josh.

I arrived in town with just a few minutes to spare, but wanted to swing by the old homestead.  When I last passed through in April, I had thought that the people currently living in my old home had finally cleaned up the backyard.  As I drove through the alley, I saw I had been quite mistaken.  All of the overgrowth is simply dead and currently buried under a pile of snow. Ah, well.

Josh and I met at Taco Tico where I enjoyed a few tacos and conversation.  I then suggested that we do a bit of mall walking so I could get a little exercise before driving another 3 hours and to build my strength after a recent illness.  Crossroads Mall was the hangout spot when I was a kid in Fort Dodge.  Not only did it have a stellar arcade in Aladdin’s Castle, but it also did Christmas right for the kids with Santa’s gingerbread castle.  Santa would visit with his kids in the front of the castle while Santa’s talking reindeer, Randolph (Rudolph’s cousin), would visit with kids in the back.

I fear Crossroads is on its last legs.  So much of it is shuttered and it has lost its three major stores of Younkers, J.C. Penney, and Sears.  I would not be surprised to find it permanently shuttered in the not too distant future.

I wished my old pal good-bye and continued the drive to Chatfield.

Chatfield is a tiny town in the Rochester region of Minnesota.  I easily found the house, though the driveway was quite icy from last week’s storm.  I was driving too slow to get up the drive, so I backed up and hit it with a bit more speed and powered my way up.  Keep this in mind for later.

As I walked towards the back door, Bob opened it wide with a smile on his face and welcomed me into the inn.  Once inside, I met Bob’s wife, Ruth Ann, and his sister, Elaine.  Bob and Ruth Ann led me to Mrs. Lovell’s Room, the bedroom of the house’s original owner.

Now I didn’t have a lot of time to explore, but I was blown away by the place just from my little walkaround of the first floor.  I had not been in an inn of this type since the Victorian Villa originally stoked my interest in B & Bs way back when.  And every room was jam packed with Christmas.  Trees, decorations, Nativity scenes, Santa Clauses.  You name it.

As I said, time was at a premium.  I had to head into Rochester in order to attend church for the Feast of the Immaculate Conception.

One good thing about Chatfield is that it has easy access to the highway, thus easy access to Rochester.  The downtown area can be a little confusing as the street numbers repeat themselves, quickly change direction (like 1st St SW to 1st St NE), and transform from street to avenues in the blink of an eye.  However, a good map allowed me to easily find St Francis of Assisi.

It was a nice little church that holds services in both English and Spanish though I suspect Spanish is the primary language as the priest made a joke about the bishop coming for a service so that sermon would be in English.  Father was from Colombia and he used the sermon to introduce a tradition popular in the Hispanic culture.  For the feast of Our Lady from Guadalupe, Hispanic families often take part in “The Night of the Little Candles” where a family will light a number of candles equal to the number of people in the family and place them in the main window of the house.  As such, Father had six candles lit on the altar.

After church I then headed to the Rochester Civic Theatre in order to review their production of Annie:  The Musical.  You can read my review for it here.

When the show was done, I returned to the inn where I once again didn’t give the car enough juice to get to the top of the driveway.  So I started reversing back down to take another run.  Only this time my car turned sideways and I got wedged in at the bottom of the driveway.  No trouble.  I got out of my car to kick some snow away and rock my way free only to find I had locked myself out of the car.

Luckily, Bob was still up and working as he and Ruth Ann were preparing for a luncheon the next day.  He contacted the police for me and within a few minutes the police had arrived and they managed to get my door open.  Bob then guided me out and I got the running start I needed to get back up to the top of the driveway.

Back in the house, Bob whipped up a bowl of chili for me as I had not eaten any dinner.  As I ate, Bob told me a bit about the house before giving me the formal tour of the house.

Oakenwald Terrace is an L-Shape Shingle Style Victorian mansion which boasts 23 rooms and 10,000 square feet.  It was the dream home of Ellen Lovell who had it built in 1897.  The Lund family has owned it since 1973 and, for the first 30 years of their ownership, Marion Lund operated it as an assisted living home.  In 2003, it was changed into a bed and breakfast and a bit of a living museum famed for its 4 course breakfasts.

After my tour, I finally got a good look at my room.  As I said, I was in Mrs. Lovell’s Room and it had originally been Mrs. Lovell’s bedroom. It holds one of the house’s original 4 fireplaces and the room is as Victorian as you can get.  A comfortable sitting room takes up the bulk of the room with several chairs and a settee.  Behind a screen is a bed with a private bedroom to its left.  I admired my Christmas trees and other holiday items before finally crawling into bed and calling it a night.

In the morning I grabbed a shower and sat down to breakfast.  Course #1 was a tiny dish of raspberries, kiwi, and cream.  Course #2 was a banana pancake.  Course #3 was grapes, ham omelet, and English muffin.  Last, but not least, was a piece of lemon sponge cake topped with an Andes mint.  In short, epic deliciousness and no need to eat again until night.  Bob joined me while I ate sharing stories about the history of the house and neighborhood and the history really adds a vital dimension to the experience.

After breakfast, I went back through the house to finally take photos.  Once I got some posted, I headed back to Rochester where I spent a few hours at The Machine Shed.

This is a tiny vintage arcade where $10 lets you play to your fill.  The arcade does not hold many games though there is an emulator that holds over 400 games.  I played a bit of Shinobi, Root Beer Tapper, Dungeons & Dragons, Sunsetriders, and Teenage Mutant Ninja Turtles:  Turtles in Time.

Where I was done gaming, it was back to the inn for some writing and then off to church at Assumption Catholic in Canton, MN.

My directions were. . .less than stellar.  Supposedly the trip would take 35 minutes, but it was 45 minutes before I even reached the town.  There my directions failed me utterly and it was only through divine aid or utter luck that I managed to stumble upon the church so I ended up being a little bit late, but still enjoyed a pleasant service.

When church was done, I returned to Chatfield where I had dinner at Jac’s Bar and Grill.  The joint was jumping and I managed to get the last booth.  I was told it might take 40 minutes to get food and I replied that I had a book.  I suspected it would take less time as I saw diners leave and not get replaced.  So within 15 minutes, I had my food as the restaurant continued to empty due to an Elvis Christmas show taking place at the local Arts Center a few blocks away.

I enjoyed a Monkey Burger which had ranch dressing, bacon, cheese, jalapenos, and a spicy sauce they called monkey sauce.  It was quite delectable and filled the cavity whereupon I returned to the inn for the night.

The first thing I did the next morning was stoke the fire.  Then I drew a hot bath where I just soaked until the heat was gone from the water.  Feeling refreshed, I was ready for some breakfast.

Today’s meal began with another dish of mixed fruit followed by an apple pancake puff.  Then there was a ham and cheese quiche with a peppermint ice cream cake for dessert.  Another filling meal with more conversation including a couple who were visiting Chatfield for the Elvis show last night.

And so ends this chapter of the Cavalcade of Christmas.  Chatfield is a nice little town with some interesting things to do and is near Rochester if you need some big city fun.  And Oakenwald Terrace should be your lodging of choice as it is a living museum loaded with history.  They do Christmas right.  They certainly do meals well.  The innkeepers are aces in hospitality.  And the inn is just a lovely step back to a less cluttered time.

Until the next time. . .happy travels.