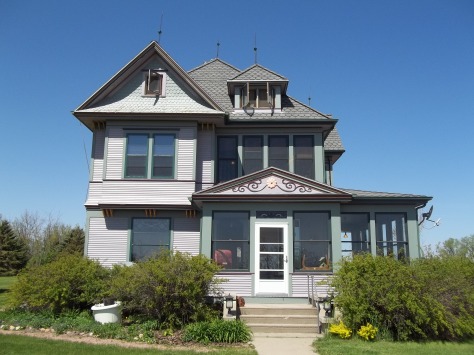 It was one of those weekends where everything falls into place.  I’m just finishing up a stay at the Steever House in Lennox, SD and my only regret is that I can’t stay for an extra day or two.

But let’s start at the beginning.

It was an absolutely perfect spring day for one of my jaunts.  The sun was bright.  There wasn’t a cloud to be seen.  And the temperature was, mmm, just right.

I hopped into my car and began the drive to the Sioux Falls area of South Dakota where I would be staying at Steever House as well as reviewing Jesus Christ Superstar for the Sioux Empire Community Theatre.

The drive was great and it was nice to enjoy some new scenery as I headed north to South Dakota.  Once I crossed the border into the state, I admit I did a double take when I saw the 80mph speed limit.  Maybe I’ll try the max speed on the empty Sunday roads, but not being used to that type of speed, I kept things to about 75mph.

I arrived in town about 12:30pm.  Regrettably, I was only doing an overnight so I didn’t have the normal time that I usually allow my explorations.  But if I were going to do one thing, it had to be a visit to the town’s namesake falls.  So off I went to Falls City Park.

I don’t think I’ve ever seen so many people in a park in my life.  As a testament to the absolutely gorgeous day, families galore were having picnics, exploring the Sioux Falls, riding bikes, and meandering.  Heck, a group was even taking wedding photos there.

The falls themselves were quite the sight and I found myself mesmerized by the beautiful waterfalls and even saw salmon trying to swim upstream for the first time.  The day was so pleasant that I took a nice shady spot under a tree to catch up on my reading.

About 2:15, I headed over to the small town of Lennox to check into Steever House, owned and operated by John & Sara Steever.  This lovely home is certain to trigger relaxation as it is on a secluded piece of property about ten miles outside of Sioux Falls.

As I pulled into the driveway, I was greeted by John who introduced me to his wife Sara.  He led me to the Dakota Suite, the inn’s newest room and my base of operations for the night.  This is the biggest room I’ve ever had at a B&B and I instantly felt calmer with the room’s soft blue walls and carpeting.  It consisted of a massive bedroom/living room area with a comfortable king sized bed and a couple of plush leather easy chairs set in front a fireplace.  I also had a sitting room and a ginormous bathroom with a whirlpool bathtub.

I had an early dinner reservation so I organized my belongings and drew a bath.  The tub was actually a “smart” tub with a little computer panel to activate the jets and even warm up the water (so I assume as I saw the temperature go up a few degrees during my bath).  I rested my head on the bath pillow and let the jets work their magic.  There was a set of jets shooting water into the small of my back and it felt like a massage therapist knuckling the area.  I could have sat there for an hour or more having the area kneaded.

But since I didn’t have an hour or more, I lingered for as long as I could then got into my suit for dinner and a night of theatre.

I had made dinner reservations at Carnaval Brazilian Grill and, trust me, if you’re in the area, you need to eat here.  Reservations are highly recommended as the place was packed when I got there and it was only 5pm.  Thanks to my reservation, I was immediately led to my table where I ordered a Brazilian cream soda and the famed Rodizio meal.

Brazilian steakhouses are fun because it’s almost like a buffet.  Instead of ordering a standard meal, you get to visit a hot and cold salad bar plus waiters will bring skewers of meat to your table so you can have as much or as little as you want.

This was probably the most in depth and impressive salad bar I have seen with gourmet style vegetables such as champagne soaked onions.  I whipped up a little plate of spinach salad topped with onions, fresh jalapenos, bacon bits, and ranch dressing along with a spoonful of roasted garlic mashed potatoes and caviar medley.

I returned to my table to enjoy my salad, then flipped my tower for the meats.  Brazilian steakhouses give you a disc (or a tower in my case) that is green on one side and red on the other.  When you want some meat, you turn it to green so the waiters will stop by with their skewers and flip it to red when you want a break.  Over the next 90 minutes, I had a sampling of top sirloin, lamb, glazed barbecue pork, and a signature beef marinated in Carnival’s homemade marinade.  That last was the tastiest dish.  I also tasted grilled pineapple basted in cinnamon which was amazing.  Coming from me, that’s something as pineapple is one of the few foods that I genuinely dislike.

I realized I had made a wise choice in having an early dinner as I exited.  Where the restaurant had been packed before, it was now overflowing and spilling out the doors.

From there I hopped into my car and made my way to the downtown area of Sioux Falls which is quite reminiscent of the Old Market area of my hometown of Omaha, NE right down to the lack of parking.  I easily found the Sioux Empire Community Theatre and you are permitted to use most of the empty business parking lots in the area which one-ups Omaha since you now have to pay at the Old Market parking meters during the weekend.

This was one of the best nights of theatre I have experienced.  The theatre is beautiful and it was a sensational production.  You can read my review here.  I even had the pleasure of meeting the theatre’s artistic director Patrick Pope and the show’s director, Eric Parrish.  Patrick told me I’d be welcome back at the theatre any time so I look forward to reviewing more shows at this little jewel.

Then it was back to Steever House for a little writing and a most restful night’s sleep on my bed’s soft mattress.

I felt fully refreshed when I awoke the next morning and went downstairs to enjoy a tasty meal of fruit, granola and yogurt, ham, Dutch baby, and baked apples.  I also had a pleasant conversation with the Steevers and another couple staying at the inn.

But now it’s back to reality.  But if you’re in the Sioux Falls area, stay a night at Steever House.  It’s comfortable, secluded, quiet, and the hospitality can’t be beat.

Until the next time, happy travels.